A very big thank you for electing me as Deputy of Grouville & St Martin in June, 2022. I am truly humbled to have been chosen to represent not only Grouville but St Martin as well in the Island’s historic General Election. I’m very much looking forward to working with Deputies Steve Luce and Rose Binet, both of whom I’ve known for many years, along with the Constable of St Martin, Karen Shenton-Stone and newly elected Constable of Grouville, Mark Labey. 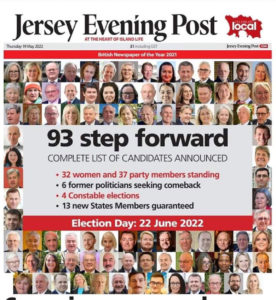 As you know, the Election saw the abolition of the island-wide mandate and country parishes merged into electoral “districts.” On the plus side the changes created contested elections in each of the 9 districts, got more diversity into the States Chamber with the election of the first Romanian, the first Black person and 21 women elected – which is more than ever before. While acknowledging the benefits brought about, the changes did not increase voter turn-out and like many of you, I felt disenfranchised at having my usual right to vote for 10 candidates (8 Senators, 1 Deputy and 1 Constable) reduced to 4. There is already a proposition lodged to reinstate the Island-wide mandate which is due to be debated in the Autumn.

I was interested to learn that ‘the District of Grouville and St Martin’ saw the greatest voter turnout of all the Island Districts at 51.1%. I am not sure what comfort we gain from this given one the considerations for the Electoral Reform was to increase voter turn-out especially in the Urban Parishes where it was felt people didn’t vote because their vote was not given equal weight to those in the Rural Parishes. These changes did not however translate into increased numbers at the ballot box. 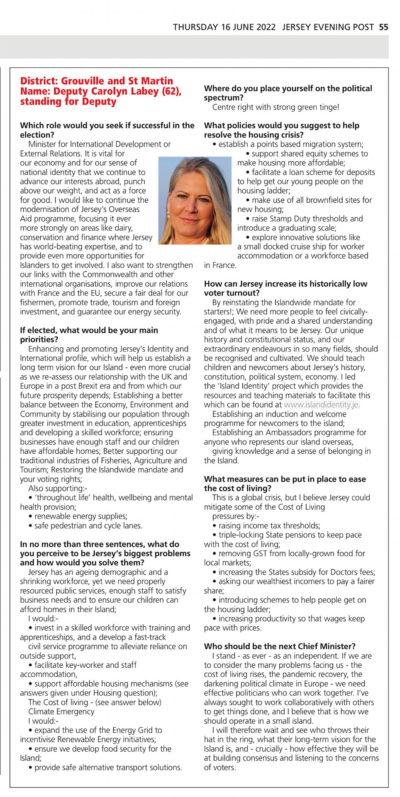 Since the election, the States Assembly has been busy voting Members into their various roles to take on the duties and responsibilities that comes with political office. I feel there is a renewed energy in the Island as we hopefully put Covid behind us and while acknowledging the hard work of the previous Government in getting us through those challenging times we can now look forward to a new chapter. In July, the States Assembly elected Kristina Moore, the Islands first female Chief Minister, who in turn put together ‘her slate’ of Ministers which included an equal number of female Ministers in her Council.

As I said on the electoral trail, my focus remains on the Community; be that at Parish, Island or International levels. I am therefore delighted to have been elected to the Parish Communities of Grouville and St Martin but also to the role of Minister for International Development and Chair of Jersey Overseas Aid. I realise that this is my second term as Minister in this role, but the last term proved to be difficult, in that operating an outward-facing portfolio during two years of lockdown was challenging. I am however very excited to take-on the responsibility afresh and deliver all that we can for the world’s poor and vulnerable, demonstrating that Jersey is a good, global citizen, prepared to play its part on the International stage. This is especially important as an Island who received International Aid itself during living memory.

At Parish level, in Grouville I plan to resurrect the Community Support Group and also help St Martin set one up. There is already a group of volunteers ready to take on this task, but if you have a bit of spare time and would like to join the CSG Team, please get in touch with me or the Parish Hall. We offer a non-emergency service to Parishioners to offer a bit of help in peoples daily lives – be that shopping, picking up a prescription, changing a light bulb or having a chat over a cup of tea.

I am also working on establishing regular Parish Surgeries at various venues across Grouville and St Martin. I have suggested some dates and times and hope to be joined by the Constables and Deputies of the two Parishes.

I continue to be keen to see a network of safe cycling and pedestrian lanes progressed, not only around the Parish, but the whole Island. We have the scenic Tourist Routes (although the speed limits on those lanes is often too fast) now we need safe commuter routes to parish hubs and to St Helier, in lanes where priority is given to cyclists and pedestrians and the speed limit is appropriate. This is a project I would like to see progressed by the Parish Roads Committees and I will be making further representations to the new Comite des Connetables and the new Infrastructure Minister.

Despite the current challenges the Island faces, I am looking forward to a fulfilling term as one of the Eastern Parish Deputies, and I am hopeful that much can be achieved for our Community – at Parish, Island and International levels.

(The first Monday or Tuesday of the Month) 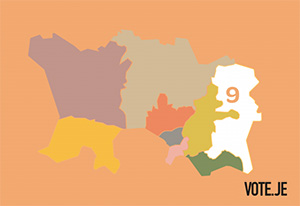 Jersey now matches Wales in the proportion of women elected with more women than men successfully elected for the first [...]

Twas the night before…. Polling Day 2022

From Liberation Day to the Summer Solstice on my Election Campaign During the “Election 2022” campaign for Deputy of Grouville [...]

Look out for my election information postcards for the new voting district of Grouville & St. Martin