Written by Save Our Shoreline – Environmental Campaigners 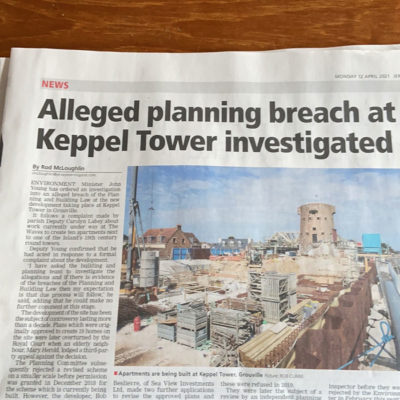 Here is a brief report on today’s States debate which has been the result of a huge amount of work by Deputy Carolyn Labey and ‘The Supporters of Mary Herold.’ (That includes SOS Jersey and many of our Save Our Shoreline Facebook followers!)

In a tense and at times emotional debate which started at 12.15 and continued after lunch until 3.40, the long awaited debate about the Keppel Tower / Mary Herold appeal was held.

This was despite an attempt by the Planning Minister, Deputy Steve Luce, last Friday to derail the Proposition.

As Deputy Labey succinctly put it, The Minister was trying to confuse the Assembly by an 11th hour change to his appeal.’

Deputy Labey presented the 2,033 signature petition which was collected in only a short time by only a few people (including Mary and her dog) and which demonstrated the anger felt by parishioners and other islanders that an 87 year old lady could be treated so badly.

The Deputy gave a very powerful opening speech and briefly outlined the long history of the Keppel Tower case and the current situation. It was entirely probable (as other speakers pointed out) that if the Minister was allowed to go to the Royal Court even on a ‘watered down’ clarification of a legal point, then should he succeed that would allow a new application to be submitted by developers which would be approved by officers and then receive fast tracking and Ministerial approval.

Deputy Labey said: “He (the Minister) should be saying: ‘The Island plan needs amending-do it here, not through the courts.’ … As the Royal Court said in their judgement, ‘A legalistic approach is to be avoided.’

The Planning Minister replied, insisting that he was ‘only seeking clarification on one point’ and apologised for not having had the time to present his notes to the Assembly in reply to the proposition (something that he himself was always cross about when others did it).

The Minster’s speech seemed as if it was prepared in part by others and he didn’t seem convincing. The COM rallied round to support him and the voting reflects that, with the addition of four constables (to be advised) and one or two others. The full voting list will be published soon here and in tomorrow’s JEP.

The Attorney General’s legal advice was sought on several occasions, and although he wouldn’t be drawn as to the likely outcome if the proposition was defeated (a point chased up by Deputy Montfort Tadier), it was clear that it could result in a developer swiftly following up the ‘clarification’ and appealing the decision again..

As Deputy Russel Labey pointed out, if the proposition failed, the result would be ‘a fast track to achieving the Minister’s aims. Rather than deciding an amendment to the Island Plan through the proper route’ (ie, The States Assembly).

Deputy Carolyn Labey said in her closing speech, ‘The Minister’s comments were ‘misguided spin’ and that his ‘misinformation campaign’ was verging on scaremongering.’

The Planning Minister can not now go back to the Royal Court, saving the taxpayer countess thousands of pounds on top of the huge sums already spent by his Department. (Can the COM now give the Christmas Bonus back to struggling OAPs?)

We would like to thank everyone who helped write to the Minister as we asked 3 weeks ago.

And for those of you who signed the petition and otherwise supported our campaign and helped. 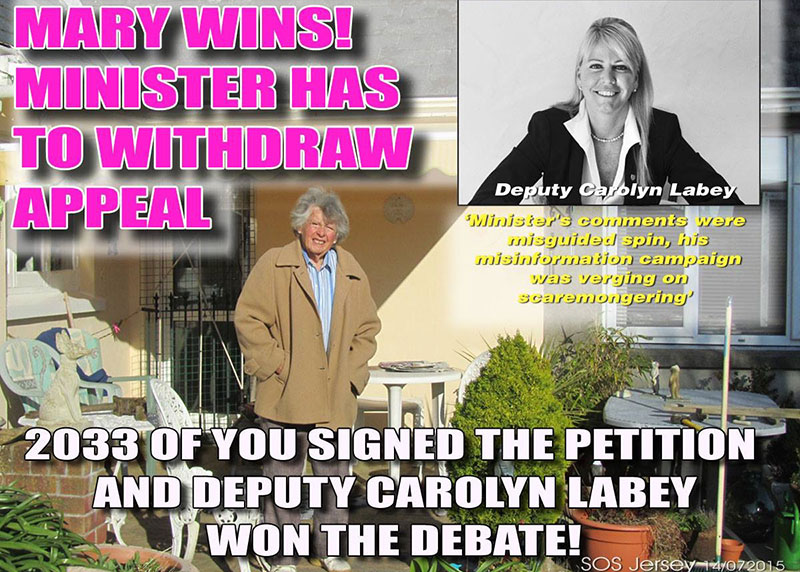 After yesterday’s news, when we learned that it is quite safe for toddlers in pushchairs to go past guys in hazmat suits and special masks digging pits in known contaminated land (as long that is, as they are about 10 feet away and there is bit of plywood between them and the work), we are relieved that some sanity has returned to those who rule.